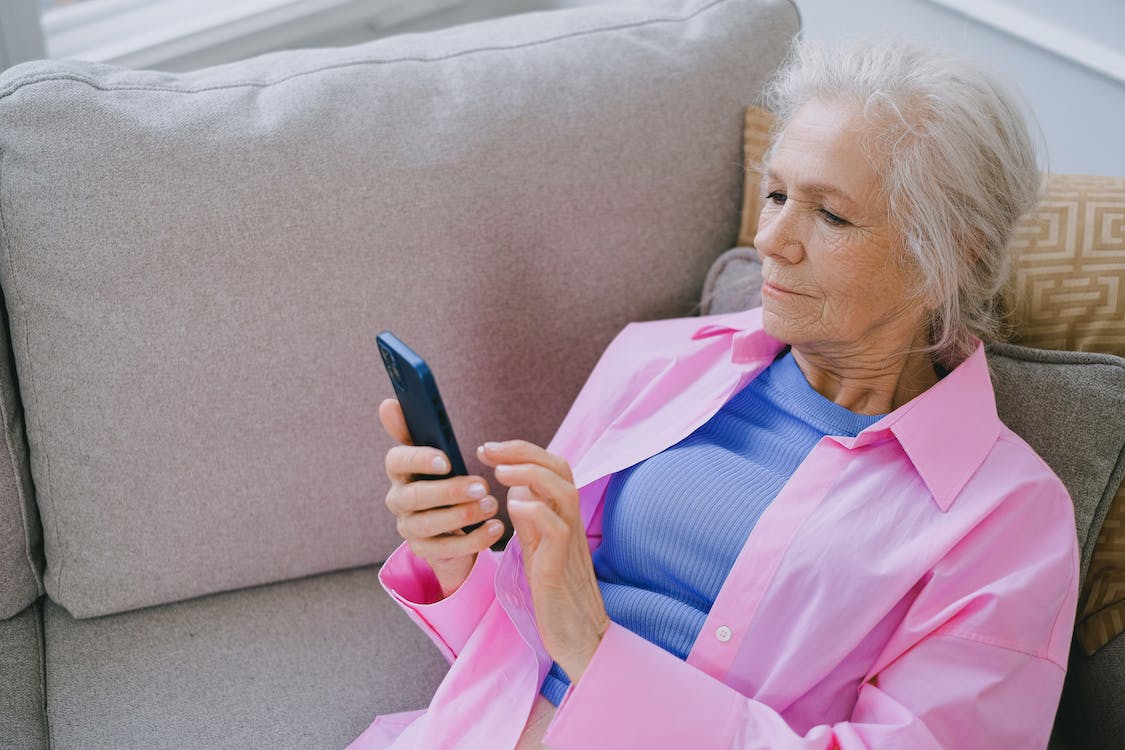 Martin whistled down the halls of Metropolitan Convalescent Center past cardboard reindeer and snowflakes cut from construction paper. The scent of pine swags perfumed the normally medicinal air. This would be his first time speaking directly with one of his cellular customers. He’d worked everyday since Thanksgiving implementing cell phone leasing and other portions of his Cyber Cemetery plan. He felt proud of how well things had started, proud of his boss Howard’s reaction, proud of how favorably phone leasing compared to his self-storage mausoleum concept in terms of projected revenue and early adoption rates. If the rest of his work modernizing Helflinger’s Memorial Park and Funeral Home went this well, maybe he’d be up for another promotion within a year.

According to nursing home policy, visitors were to check in at the nurse’s station. Martin did so, received directions, and asked about Mrs. MacPherson’s ailment. “Emphysema,” the nurse said.

He knocked on Mrs. MacPherson’s open door and peered inside. Bands of red and green crêpe paper draped from corner to corner and a potted pine tree less than a foot high balanced on the window ledge. When he stepped into her room and introduced himself, his urge to whistle Christmas carols evaporated. She must have been tall—her body stretched along the mattress from headboard to footboard. She was withered thin excepted for her rib cage. As the emphysema destroyed her lung capacity, her chest muscles worked ever harder at breathing. From months of wheezing she had developed the torso of an Olympic swimmer. Next to her bed stood a small, stainless steel cylinder of oxygen. Martin’s reflection in the metal resembled a pencil with wavy hair for an eraser. A clear plastic tube snaked up through the side rails of the bed, circled Mrs. MacPherson’s head, and entered her nose.

He sat in the old Naugahyde chair on the far side of her bed. Cracks in the cushion pressed sharp ridges through his gray slacks and into the back of his thighs. He exhaled through tightened lips, and balanced his day planner and Mrs. MacPherson’s file on the wide armrest. Down to business. “How are you feeling today?”

Fair enough, he thought, although she seemed feisty. Talking looked difficult for her—a gasp preceded nearly every phrase. He noticed a standard beige phone with white buttons on the stand next to her bed. “You already have a phone. Why do you want a cellular phone?”

“I won’t be here forever. Let me see that thing.”

He drew a phone out of his suit pocket and slid the lump of electronics into her cold bony fingers. “Have you used a cell phone before?”

He reviewed with her the pamphlet listing all the numbers pre-programmed into the phone and the various informative recordings she could access free-of-charge. The system contained information on hiring lawyers, wills and probate, inheritance, tax planning, establishing trust funds, burial versus cremation, grief counseling, steps to take upon the death of a loved one, and planning a funeral that’s right for you and your family. He pressed #-4-3 and let her listen. She nodded along to the general overview of Helflinger’s history and services. After the tape ended, she handed back the phone.

Martin laid it on the bed and began his up-sell presentation on the optional voice mail system when Mrs. MacPherson started coughing. A small huff came first. Another followed, then another. Her body shook harder and harder as the huffs grew into a staccato of dry explosions broken by momentary wheezes for air. Martin looked away at first, partly out of respect for her privacy, partly from his own discomfort. He fingered the cover of his day planner, and then glanced over his shoulder and out the window. Still she coughed. He re-crossed his legs to escape the Naugahyde ridges cutting off his circulation. She didn’t sound like she’d ever stop. He placed his palms on the wide armrests, pressed himself out of the chair, and reached for the button to summon the nurse. Blood tingled back into his legs.

Her lungs forced out one final burst, then stopped. Her fit had lasted over a minute. She cleared her throat and wiped her mouth with a tissue. “What if you answer a call you don’t want?” she asked.

Martin sat back down. “You still pay. But the phone comes with Caller ID, so you can see the number calling you before you answer. If you’re worried about cost, it’s better to just use it for outgoing calls.”

“Oh.” With a knobby hand she adjusted her oxygen tube. “Do you smoke?”

She pointed out the window to where icicles hung from a covered causeway. “On breaks, nurses smoke over there.” She smiled. “The smell comes in, even with the window closed.”

“Didn’t smoking cause your emphysema?” he asked.

Martin leaned towards her. “Aren’t you mad at the tobacco companies? Don’t you want to sue or something?”

“I knew exactly what I was doing.” Her long fingers smoothed out folds in the blanket. “I miss it. Used to be cigarettes were sociable. Waiting for the trolley, you smoked and talked. I met a lot of boyfriends. And my husband.”

“Still, a settlement might get you a lung transplant.”

Martin picked up the cell phone from the bed covers. “I checked our records and the phone your son leased has voice mail. That means you can leave him a message even when his phone is turned off.”

“Scared he won’t get my house.”

“Nut case. His sister’s worse. I might leave it all to his ex-wife.”

“Then you haven’t decided? You haven’t made a will?”

She shook her head. “My husband made me before he passed on. The kids get it all—don’t deserve it.”

Martin wondered if he deserved inheriting the bungalow once his grandparents died. He’d seen them only three times the whole year—Christmas Day would make four—despite living less than twenty miles from them. Next year he’d visit more.

Mrs. MacPherson drew in a long breath and asked, “Will it work underground?”

“It works inside buildings. I don’t see how dirt is much different.” He cleared his throat, which had grown ticklish. “Why?”

She turned her head to look out the door and into the hallway. “In case they bury me by accident.”

He stared at where the oxygen tube crossed her cheek. He could see her pulse in the arteries of her neck. She seemed afraid. “I think that’s pretty unlikely,” he offered in a soft voice.

“Saw a story on TV about organ donation. They were knocking out dead donors. Why, unless they ain’t dead?” She paused. “I want a phone in there.”

“Yes, but that means you’ll have to purchase the phone, instead of leasing it.” He picked up her file. “We’ll put it here, in writing.”

“No embalming. I don’t want them taking my blood.”

Martin repeated her requests as he wrote them. “Bury with cell phone, no embalming.”

“That takes a legal document,” Martin said, “called a health care directive or a living will. It needs to be prepared by an attorney and signed by a witness.”

She picked up her new phone. “I’ll just call one.”

Martin showed her the speed-dial code for lawyers in the pamphlet. Before she called, he advised her to listen to the informative tape Helflinger’s offered on health care directives. As she listened, he shifted in the chair. A elevator version of “Jesu, Joy of Man’s Desiring” whispered from the speakers in the corridor ceiling. At some point in her life, at least subconsciously, Mrs. MacPherson decided that smoking was more important than living, or at least living longer, more important than being with her children longer. Maybe that was just the nicotine talking. But veterans buried at Helflinger’s had placed country and freedom ahead of life. Mothers valued family more than life by dying in childbirth. Fireman died rescuing strangers. Who or what did he love more than living, more than the mere act of being above ground and drawing breath? Nothing and no one came to mind. He was young, not yet 30. Maybe finding those supreme desires took time. Still, he felt a small pit open inside.

When the tape ended, Mrs. MacPherson called the attorney featured on Helflinger’s phone network and told him no machines. She hung up and smiled smugly as she put the phone on her rolling bedside tray, picked up her water glass, and drew a couple sips through the green straw.

“Grew up in Regina,” she continued, “in Canada. Cold winters. About the time school started, I’d see them digging graves before the ground froze.”

Martin grinned to himself and thought she was quite chatty for someone with breathing problems.

She took another sip of water. “Only one way to tell.”

“Rotting,” she said, with a wheeze between the syllables. “Only sure sign of death.”

Martin felt his stomach scrunch up and roll over.

“I wanted to set outside awhile. To make sure. Health codes don’t allow it.” She shook her head. “Tax money for stupid rules like that. In Regina, we laid out folks in our front room. Two, three, days.”

“Would you like us to place you in refrigerated storage for three days before burial?” Storage for that long would cost more than embalming, but he didn’t want to worry her with details about money. Cost wouldn’t change her mind.

“Put that on your list.” Another coughing fit came and went, shorter than her first.  “Some French guy figured it out.”

“For a death test. Back then, folks didn’t kiss doctor’s butts. Coffins had alarms. Escape hatches.”

“Got the Smithsonian article at home.”

“What makes you think you’ll be declared dead when you’re not?”

“It could happen.” Mrs. MacPherson shifted her gaze to look out the window. “If I have to go, I don’t want no mistakes.”

Martin noticed her fist squeezing a handful of blanket. He could count the bones in her ashen hand. According to the clock above the wall-mounted TV, he’d been visiting with her for nearly an hour. She was probably tired from all her talking. She told a good story, though. He felt sad that soon her lungs would quit and she’d be refrigerated and then probably buried under the snow.

He stood deliberately and lied. “My pager just buzzed, Mrs. MacPherson. I need to get going.”

“It’s all written down.”

She pointed her finger at the tray. “Hand me that.”

He gave her the cell phone. She laid it on her muscled chest and rustled the sheet up over her head. “What are you doing?” he asked.

“Practicing.” The phone beeped when she turned it on. The sheet muffled the sound. Martin shook his head. As he left the room, he heard her say, “Turn out the lights—it’ll be dark.”