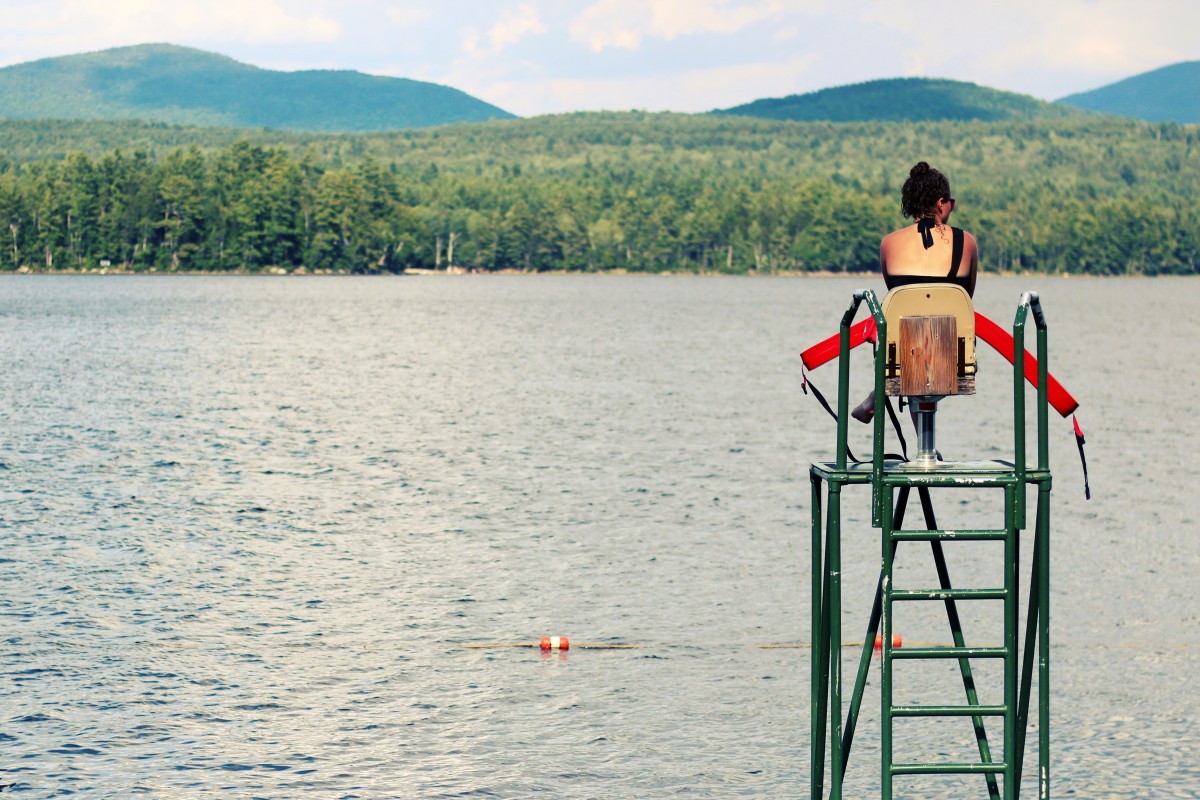 Karen sat in the scuffed, white rowboat and guarded the floating platform anchored 30 yards off the park shore. A trio of skinny guys with stringy hair and tattoos splashed cannonballs off the diving board. A handful of younger kids lay on the platform, tanning. She constantly fidgeted and feathered the oars to compensate for the small breeze blowing across the water. When the flagpole on a nearby boathouse lined up with the tall fir tree on the hill, she knew she was in position. The chattering of the crowd on shore drifted across the water to mix with the roar and smell of ski boats further out in the lake.

This was Karen’s first summer working on the lake, which made her a rookie in spite of four years of guarding at pools. She disliked the label, the way she had disliked being a freshman at the bottom of the college hierarchy. In drills with the boat, surfboard, or just swimming, she rarely finished second, even to Mike. Tim hazed Karen the most, usually by making her clean toilets during her breaks. She tried to ignore his enjoyment of the pecking order, because he seemed so pathetically childish. She knew she was as fast and strong in the water as anyone on the staff. He was too old for college, too old to be a lifeguard and flirting, however playfully, with the middle-school girls too young for summer jobs.

During winter semester, Karen used her college’s physical education requirement to upgrade her credentials so she could work on the lake. Lake guards made more money. The class focused more on being a teacher of lifesaving than on actual technique, which seemed an odd requirement for working the lake. On the first day of class, the instructor said that surveys showed people considered only movie stars more glamorous that lifeguards. People had no idea. Orange swim suits looked ugly on anyone. Sitting all day in the sun, hours of boredom punctuated by moments of panic, left her drained. On the lake, waves and glare and crowding hid swimmers, making it harder to keep track. At first, the increased stress exhausted her. Nearly every night in June, she dreamt of whistles and splashing and shouts.

It was a late July day, hot and blue, the busiest of the summer so far, and even her manager Phil scanned the lake from the guardhouse several yards up from shore. No breaks today, but no cleaning toilets either. At the water’s edge, Tim sat in the tower chair scanning the roped-off swimming area. Mike perched on a stool in the sand, supervising the toddlers splashing in the shallows. Mike didn’t like kids. Even from 30 yards away she could tell he was hiding behind his mirrored sunglasses. The way he twirled his whistle around his finger gave him away. This was only his second summer working the lake and he went easy on hazing the rookie.

She watched a tall, bronze-colored man with red and black shorts and washboard abs wade beyond the rope boundary of the swimming area. He looked Samoan, she guessed, or Hawaiian, and probably came from Little Manila just up the boulevard. She’d found that a quick handle, like Samoan, helped her keep track of swimmers. When the water touched his chin, the man started dogpaddling towards the platform. His head wagged side-to-side, with his mouth barely above the breeze-driven ripples. Dogpaddling often indicated a weak swimmer, but she judged him athletic enough and kept her position a few boat lengths from the diving board. One of the stringy guys hollered off the diving board.

Karen watched the Samoan’s paddling weaken. His progress slowed, then stopped just short of the platform. His hands, which had remained underwater while he paddled, now broke the surface and splashed about. She could just see his nose and chin. He grabbed for the ladder, missed, grabbed again. She hoped he’d make it. Instead, he slipped under the surface.

Karen sputtered into her whistle. She heaved the boat forward, pushing on the oars instead of pulling so the boat moved stern-first and she could see where she was going. Five quick strong strokes and she threw herself across the transom.

She plunged her arm into the water.

The man was gone.

With one motion she stripped off her whistle, sunglasses and hat, like peeling off a mask, and leapt overboard. Liquid stillness replaced the chatter of the crowd. Strands of milfoil swayed in the current. The Samoan hung near the bottom with his head bowed and elbows out and up, like a sleeping marionette. The boat hull drifted above. She approached him from behind, grabbed his armpits, then pushed off the muddy bottom and drove the man above her to the surface using just her legs. Water running into her eyes blurred her vision. The boat looked too far away for her to swim him there. With her arm across his chest and her hip in his back, she towed him a couple strokes to the dock. She pinned both of his hands onto the deck of the dock and held them there while she pulled herself out of the water. Swimmers stood dripping around her. In a calm voice, she told them to back up. Standing on the dock, she crossed her forearms, grabbed the man’s wrists, dunked him once, twice, and used buoyancy to lift him onto the platform. While lifting she uncrossed her arms to spin the man 180 degrees so she could lay him face-up on the wood planks.

Tim and Mike’s repeated calls to clear the beach echoed in the background. The man lay lifeless on the weathered planks. Water dripped from his dark muscles. First, she remembered, came shake and shout. She knelt next to him and shook his meaty shoulders. “Hey,” she yelled, “Can you hear me?” No response. She checked the ABCs: airway, breathing, circulation. No blockage, but no breathing either. She couldn’t find the pulse in his neck. She felt alone kneeling next to the man motionless on the dock.

She pinched off the Samoan’s broad nose, bent her mouth towards his, and yelped when his eyes blinked open. He gasped and coughed, then sat up stunned and mute. “Are you okay?” she asked. His eyes looked huge and vacant.

She retrieved the boat and rowed the Samoan in. The crowd standing in the swimming area parted as she neared shore. Her brain switched out of reaction mode and for the first time she could clearly see the Samoan. He probably weighed close to two hundred pounds, which made her wonder how she’d lifted him onto the platform. His black eyes glazed over from exhaustion, shock, or both. In street clothes at a party, he might have been handsome like a summer fling, but wet and drooping in the back of a little white boat he looked defeated. Mike held the boat while she helped the man to shore and up to the guardhouse.

The manager’s office smelled like wet sand and Band-Aids. A clock radio on top of the old, yellow refrigerator quietly played a pop station. Karen posed on a cold metal folding chair and towel-dried her hair, cut short for the summer, while Phil sat at the manager’s desk and wrote down the man’s name and address. He offered to call an ambulance or a doctor, a cab even, but the man quietly refused. After assuring Phil several times that he was all right, he gave back the blanket wrapped around his shoulders. He stood, walked out of the office, through the parking lot, and left the park.

Phil finished the incident report while Karen combed her hair then reapplied sunscreen to her fair skin. “That was my first rescue,” she chattered while rubbing her shoulders and neck. “My first real one, not helping a little kid in three feet of water. The first one for the beach this summer, too, isn’t it?” She knew she was just blurting out words but couldn’t stop herself. The nervous rush of saving the Samoan overtook her. She’d never done an actual deep-water rescue. She felt validated, official. “He was just hanging there. Looked like he was dead. I didn’t think at all. It just came automatically. Didn’t say thanks, did he? If someone—”

Phil pushed aside the accident form. “You screwed up.”

She stopped rubbing. “What?”

“I could tell from here he wouldn’t make it.”

Her face sagged with disbelief. Phil was the manager, but he was also the worst swimmer on the staff. She set down her bottle of sunscreen. “He looked fit. He was doing fine.”

“When he started dogpaddling, I knew. You should have too. At least get the boat close and keep an eye on him.” Phil shook his head. “I couldn’t hear your whistle. You know the procedure. Blast on your whistle and get him with the boat. What’s this flopping-him-on-the-dock stuff?”

“Whatever. It’s not Parks’ procedure. Use the boat.”

“Jesus!” Karen stood and paced between the desk and the refrigerator. “Am I here to follow rules or save lives?”

“You follow the rules, for your safety and his. If you ad-lib and he drowns, we’re in deep legal shit. Especially if you drown, too.”

“But if he drowns by the book, everything’s OK?”

Phil stuffed the accident report into a large manila envelope. He pressed towards her and lowered his voice. “Look, if we can show that we followed the procedures—ones we know keep everyone safe—then we’re fine.”

“Next time, let the lawyers save him.”

“Look, Karen, just go by the book, all right? I know you’re frazzled. I’d send you home for the day if I could. Now get back out there—Tim and Mike can’t guard that mob themselves.”

She shuffled down to the shore. The man hadn’t even said thanks. Neither did Phil. She wasn’t expecting a medal. The possibility of her drowning hadn’t even registered. Rescue by direct contact in deep water was the most dangerous thing a lifeguard could do. Still, lifeguards existed for saving people. At least that’s what she had thought before today. Now, she felt like a bullet point in someone’s liability plan. When she reached the shore Tim helped her back into the rowboat. “Way to go, rookie,” he smiled and pushed her towards deeper water.